Our Stories
“I have had a long love affair with Listowel”

“Anything I’m involved in, I get totally absorbed in it, and it takes me over”

“I take people on a tour of Listowel and I point up to the Emporium on Church Street. You have the grand eagle and the Latin insignia, and they might have been passing for 30 years and they say they have never noticed it before, and so I tell everyone coming to Listowel, look up”

When speaking about his hometown, historian and author Vincent Carmody says, “I have had a long love affair with Listowel”. 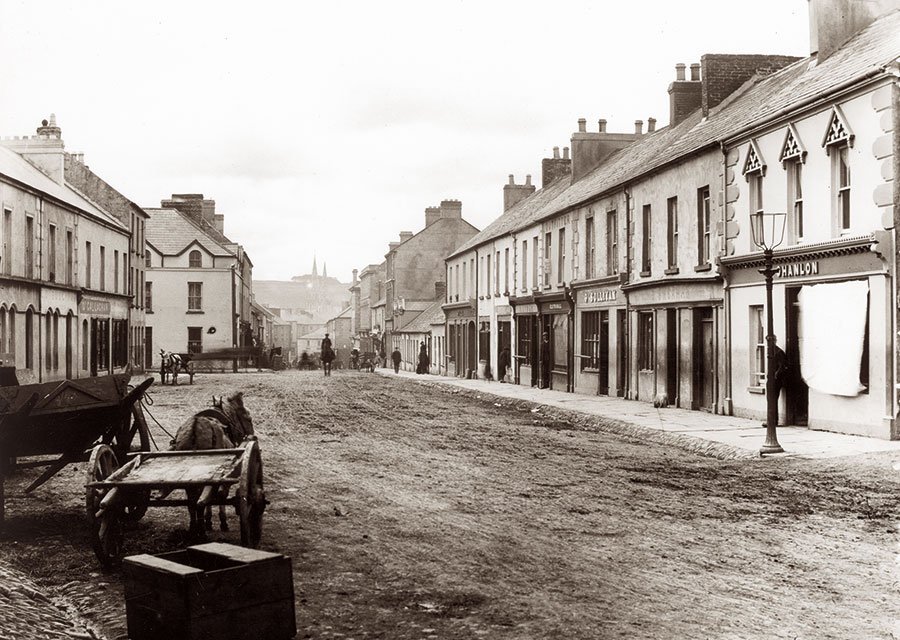 A 1904 view, taken of Upper William Street, the twin spires of St. Johns and St. Mary’s can be seen in the distance, fronting Ballygrennan hill.

Vincent Carmody was born in November 1944, in No.25 Upper William Street. William Street was originally known as Pound Lane, and briefly in the 1920’s the street was known as Patrick Street. Vincent’s great great grandfather came to Listowel some time in 1830, and it was Vincent’s grandfather John who knocked the thatched house that once stood in this spot and built the house that Vincent has lived in all his life. When speaking to Vincent you quickly come to appreciate his astounding memory. As you talk, he is constantly making connections, which house a family came out of, which townland people originally came from and much more. He is one of Listowel’s chief historians and it is through his determination, decades of research and hard work that he has acquired his powerful mental catalogue.

Vincent intended on joining his two brothers in Australia, but when his father passed away suddenly, he decided to stay at home with his mother. He married Kathleen Keane and they have three children Kevin, Norma and Karen. On settling in Listowel, Vincent began his career as a postman, eventually spending 28 years as a postman in Duagh. When he retired in 2007, Vincent had spent “38 very happy years” as a postman in North Kerry. He is also an active member of Listowel Tidy Towns and can be found out cleaning the streets in the early mornings. 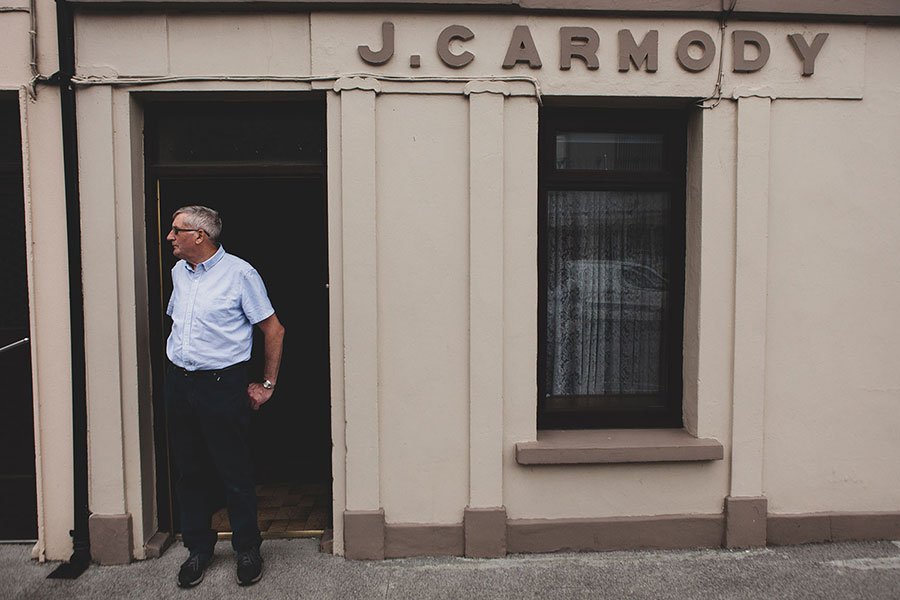 Throughout those years, Vincent was very involved in local GAA and served as club secretary from the early 1970’s until 1988. When Vincent was asked to put together a book documenting the club’s history, it launched him into a career as an author and historian. His first book, “Listowel & the GAA” co-edited by Father O’Shea and John Molyneux, was published in 1985. Soon after he published “North Kerry Camera”, in which each section features a foreword by one of Listowel’s famous writers. 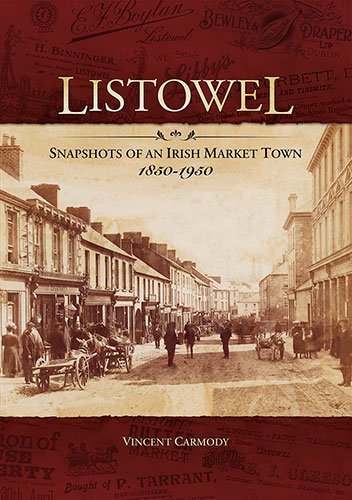 As fate would have it, one day, as Vincent was walking down Church Street he passed by a house being cleared out. In the skip out front, he noticed a ledger. This ledger contained records of the Listowel Railway. Vincent points out that “ledgers are the most amazing things, especially if they are old, because it contains the name of the shop owner, the names of the people the shop was dealing with and what they were buying”. It was the billheads in the centre of the ledger that really caught his eye, and there began a labor of love that took nearly two decades to put together. Vincent gathered billheads from Jack Flavin of Flavin’s bookshop, and from Donovan Hadley who had inherited Dromin House. When visiting Donovan Hadley in hospital one day, Vincent mentioned his latest project and Donovan told him that he was the only one that could have the documents in the attic. Smiling, Vincent recalls that he could hardly sleep the night before wondering “what’s going to be above there, this treasure trove”. The next day he took 3 big bags of letterheads home with him and then “spent almost a year on my hands and knees after work in the evening sorting them into locations and then, for Listowel especially, into the streets”.

The book “Listowel – Snapshots of a Market Town, 1850-1950” was published in 2012, and knits together a social history of the town through billheads and photographs, and through what Vincent describes as the flesh on the bones, the knowledge of the town in the text that accompanies the images, “ It’s fine to put in the posters, but you must have the knowledge of where the shop is, or if it is a play, who was in a play, and that is where the local knowledge comes in”. While researching for this book, Vincent came across a lot of posters from various printers in the town, but specifically Cuthbertson Printers. These posters, which advertised auctions, dances and much more, feature in Vincent’s latest book “Listowel – A Printer’s Legacy”. Vincent is painstakingly thorough in his research, and says of himself, “Anything I’m involved in, I get totally absorbed in it, and it takes me over” 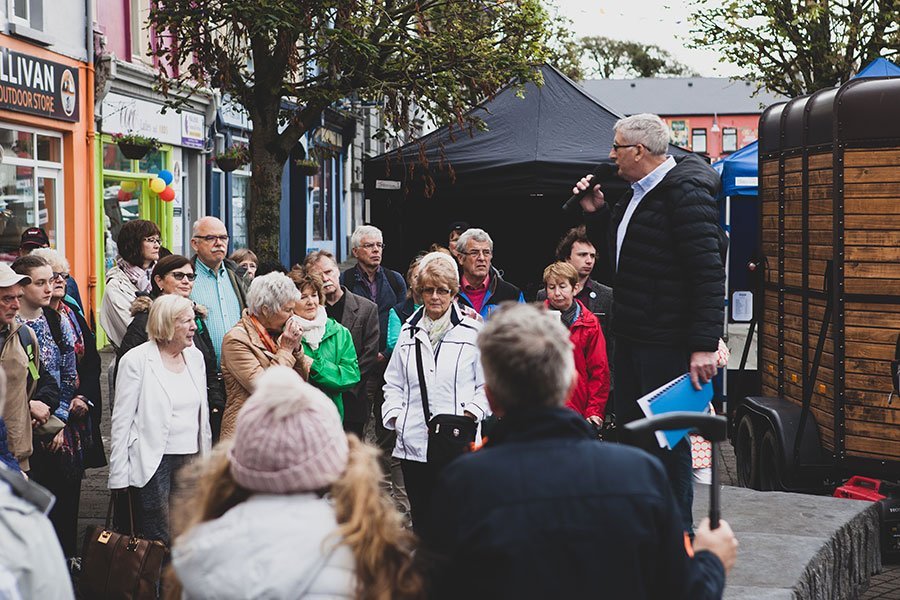 “I could give you the history of nearly every house in Listowel”, Vincent tells me, in a matter of fact way, and some years ago he suggested that he use this knowledge to guide walking tours through the town for Listowel Writers’ Week. Over the years, the guided walk has taken different approaches, sometimes focusing on the literary history of the town, or on the plasterwork of Pat McAuliffe. The guided walks are a much loved event during Writers’ Week each year, and Owen McMahon, son of Bryan McMahon, now leads the river walk which has transformed into a tribute to the town’s great writers, with songs and stories along the way. Vincent also guides private tours around the town, and one of his highlights is telling the story of Cathy Buckey, who was also from Upper William Street and who went on to become a cook in the White House. 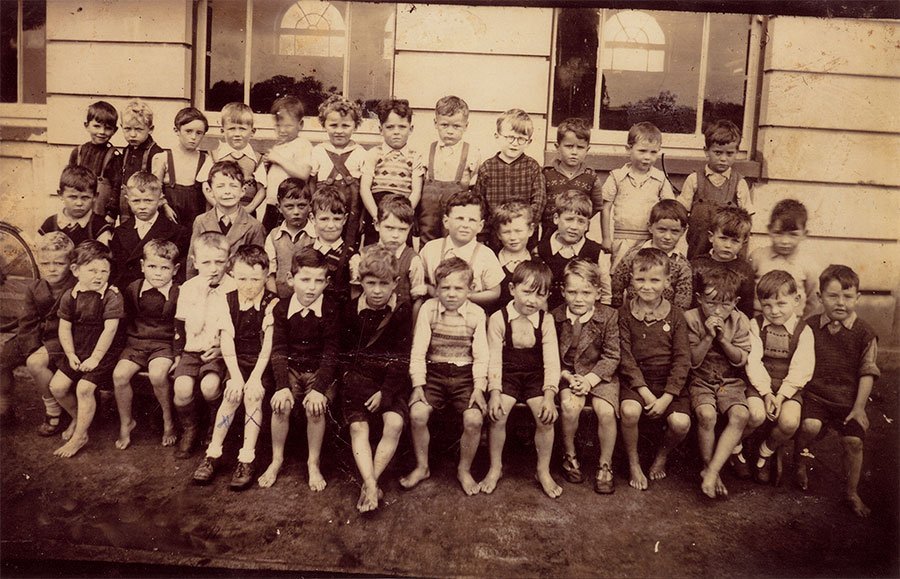 Vincent has dedicated decades of his life recording the town’s history and memories, so I took some time to ask him about his own earliest memories. Vincent describes being a small boy and witnessing Éamon de Valera’s cavalcade passing up Bridge road and the men forming a line at either side of the passing cars, holding pikes with burning sods of turf held high. In typical fashion, Vincent dates the year by the memory of a new house being built at the time, he tells me who has just renovated the house, who originally owned the site and who was building the house at the time. For Vincent, senses play a key role in memory and the associated sounds and smells of the Listowel of his childhood can still bring him back. His first class in national school was held upstairs in the Old Carnegie Library at the top of Church Street, “If I go up that stairs today, and the building has had 30 different shades of paint since, I can still get the same smell and recall the sound going up those stairs nearly 70 years ago”. The sound still echoes from 1949, the stairs are still there, still uncovered, “it must have been great timber” he remarks.

No conversation about Listowel can be complete without acknowledging the town’s writers. The streets and the writers are intrinsically linked, and Vincent remembers both John B. and Bryan McMahon walking the streets, “there must be something in the walking, I suppose you pick things up when you’re walking”. He goes on to tell a story about Bryan McMahon and a certain character in the town. Bryan McMahon and his friend Eddie Sheehy would walk around the square at night, and they might walk around the square twenty times. One night a certain man, who liked to have a drink, was sitting on the pavement as McMahon passed by. After three rounds, the man called him and said “Master McMahon, will you stop walking around the square you’re giving me a reel in my head!”, and this humour Vincent says, “is spontaneous, it can’t be picked up”. 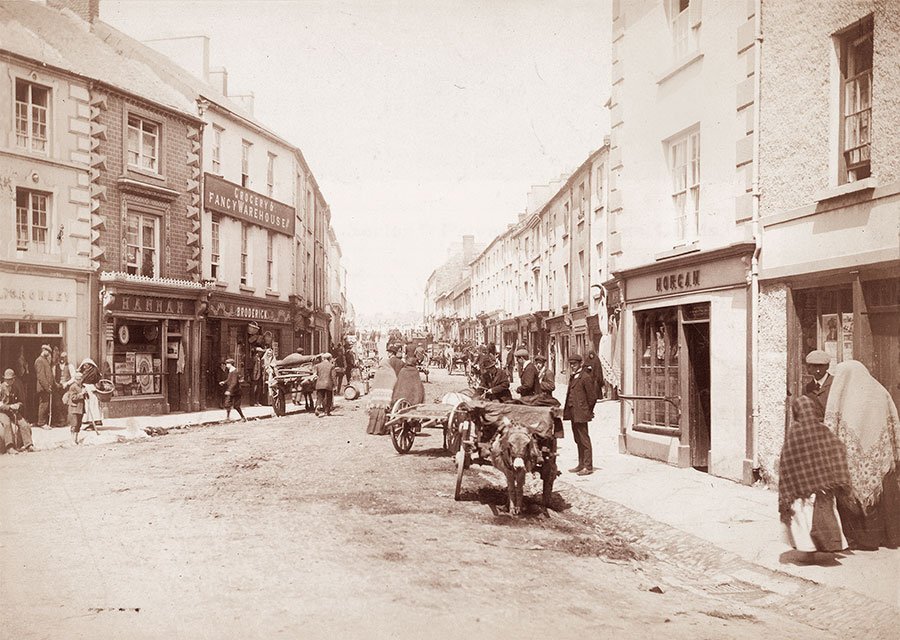 A busy Lower William Street from 1904

Vincent’s advice to visitors, and indeed to locals, in the town is simply to look up. When an individual pays attention to the streets they are walking down, they will see the magnificent work of Pat McAuliffe. On his guided tours both locals and visitors alike learn about the artwork hidden in plain sight, “I take people on a tour of Listowel and I point up to the Emporium on Church Street. You have the grand eagle and the Latin insignia, and they might have been passing for 30 years and they say they have never noticed it before, and so I tell everyone coming to Listowel, look up”.