Our Stories
“When you do a good job, people appreciate it - there’s a bit of love in it” "Listowel is a great place to live and raise a family. There is very little you can’t get in Listowel, I can’t think of a single thing offhand that you can’t get in town – and there is always room for more"

Victor Morkan, jeweller and horologist is one of the many second generation business owners in Listowel. His pride in his work is evident in how he speaks about his family business.

When Margie and Noel Morkan moved to Listowel in 1967, they felt they could offer something special to the town. Noel is a watchmaker and jeweller, and saw a niche in offering repairs on jewellery and watches. Victor remembers being told by his parents that the day they opened the shop, they only had two boiled eggs in the fridge, so if they didn’t make any money on that first day, that was all they had. It has been a success story though, and over half a century later, their son Victor is now running the family business.

Victor’s dad, Noel, trained in Roscrea before moving to Listowel. In those days, training was completed through apprenticeships. When Victor went to train after he finished school, he studied in the Irish Institute of Horology for four years, before spending several more years learning on the bench in jewellers in Dublin and Tralee. In college Victor was far ahead of everyone else because of his time spent with his father on the bench in his own shop. Victor explains that providing a service to local people is special to him, “Jewellery and watches tend to be heirlooms a lot of the time, jewellery gets passed down through families and it is something that has to be maintained. When somebody comes in with something that belonged to their grandmother and they can’t wear it anymore because of wear and tear, and being able to bring it back to its original state, there is great satisfaction in that.” He went on, “When you do a good job, people appreciate it – there’s a bit of love in it”. At this point we are interrupted by a little alarm clock going off, Victor apologises, “Oh sorry, that is a clock I am checking”, he explains, laughing.

There is a lot of pride involved when a business is passed from generation to generation. He says, “There is a great sense of pride in being able to offer a service to people. I am the only place in town that does car keys, otherwise you would have to leave town. You do it because people need it done. You want people to stay in town and get their bits done” For example, Morkan Jewellers offer free engraving with any piece purchased, and this is one way of giving back to the customers. The time and attention to detail that Victor invests in each piece is a testament to the patience and dedication it takes to be a jeweller, “When you do a really good job on something that its owner has lost interest in, and restore it until it looks new, there is a great feeling of a job well done. When you get into doing something you like doing, there is a great satisfaction in it.”

When describing his career as a watchmaker, he jokes that he spends an awful lot of time looking for parts he might drop. He goes on to describe his time in college, “When I started out in college, one of the first things they had us do was cut a perfect cube in a piece of brass, and get it down to the 100th of a millimetre, to perfection as a cube, and the reason was to teach perfection and precision. When I am doing repairs, I am working under a microscope. It is nice to be able to work to that degree, not everybody is able to do that”. The college that Victor trained at is now closed. Watchmaking is a true craft, and one has to be dedicated and passionate about their work, “a lot of people are driven insane by dropping tiny, tiny screws” he laughs.

Like some car brands, a lot of the higher end watch companies are refusing to release certain parts and are trying to keep repairs in house. The difference in what you will be charged in Morkan Jewellers compared to some cities is very different, “I have been told that there are places in Dublin that are charging €30 for a battery, I charge €6”. Victor believes in fair pricing, and while other places might charge you for the repair depending on how high-end the watch is, Victor, as a professional, gives you a fair quote for the parts ordered, “You can’t take advantage in a community that is going to be shopping with you all the time, you have to be honest”.

THE IMPORTANCE OF COMMUNITY

Victor and his wife, Karen, have three children. His eldest, Leo, is going to school in Scoil Réalta na Maidine. Victor says it’s a little weird to see his son in the same school uniform he himself wore when he was a pupil there. Victor also has identical twin girls, Juliette and Grace. Just a few days after the twins were born, Grace was rushed to Crumlin for emergency surgery. Victor and his family are now taking part in a fundraising campaign with Crumlin hospital – because as Victor says, “Ours is a success story”. He jokes that this is Grace’s first modelling contract.

After living in Dublin for 10 years, Victor appreciates the simplicity of small town life, things like being able to walk to work and spend more time with his family. After his own lunch break, Victor gets to walk up to the school and collect Leo and walk him to the childminders, “I get to spend 20 minutes with Leo in the middle of the day, messing!” He goes on, “When you see your friends with small kids who are away from their families, away from community, you see how much pressure they are under. Whereas when you are in a community there is always somebody to call. If it is not family, it is friends who you have had for a lifetime of living in the town, and you are available to do the same for them”. Victor jokes that there are pros and cons to his kids waking up at 6am, but it means that, in total, he has 5 unrushed hours with his children every day, and this time is very special to him. He points out that it only by living in a small town that he is able to enjoy family life without the hassle of a time consuming commute twice a day. 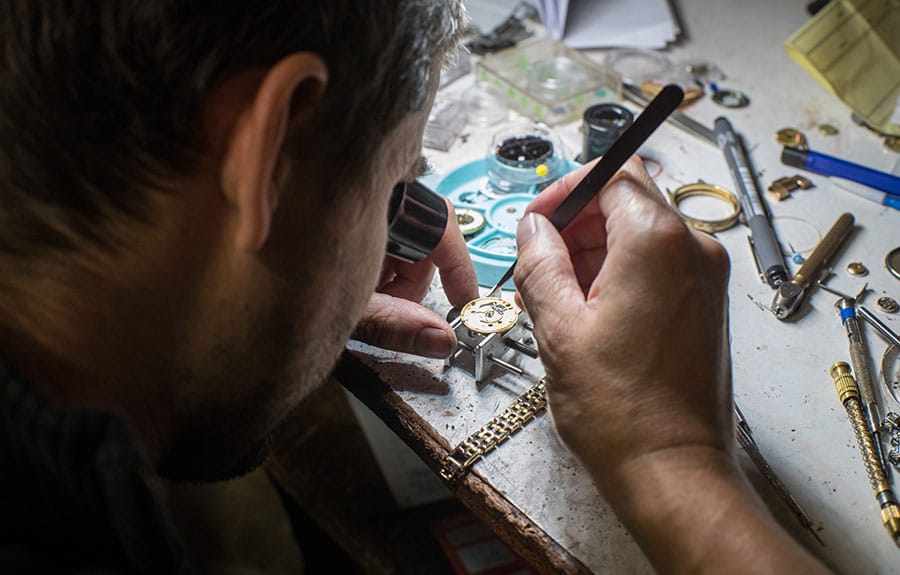 I had to ask Victor about engagement rings, and he explained that when it comes to engagement rings, it is always local people that are buying them, “If somebody is getting engaged, you are not telling anyone! Even with the wife, I’ve gotten in trouble a few times because her friends have gotten engaged and I haven’t told her”. Later on, the same customers come back for wedding bands, and you keep those customers for life. “You know what people have and what they like, you can advise people, Julia would know a lot more than me,” Victor says, gesturing to the shop where Julia is serving a customer as we chat. He goes on, “You do your best for people, and they appreciate that and they tend to come back, which I think is a sign that we are doing a good job”.

When asked what he would recommend to a visitor to the town, his answer is the Town Park. He goes down to the park twice a week to take the kids on a run, “If you are out for a walk for the exercise side of it, or for a run, it’s great to have a gallop around it”. When speaking about the town generally, he said that “Listowel is a great place to live and raise a family. There is very little you can’t get in Listowel, I can’t think of a single thing offhand that you can’t get in town – and there is always room for more”. 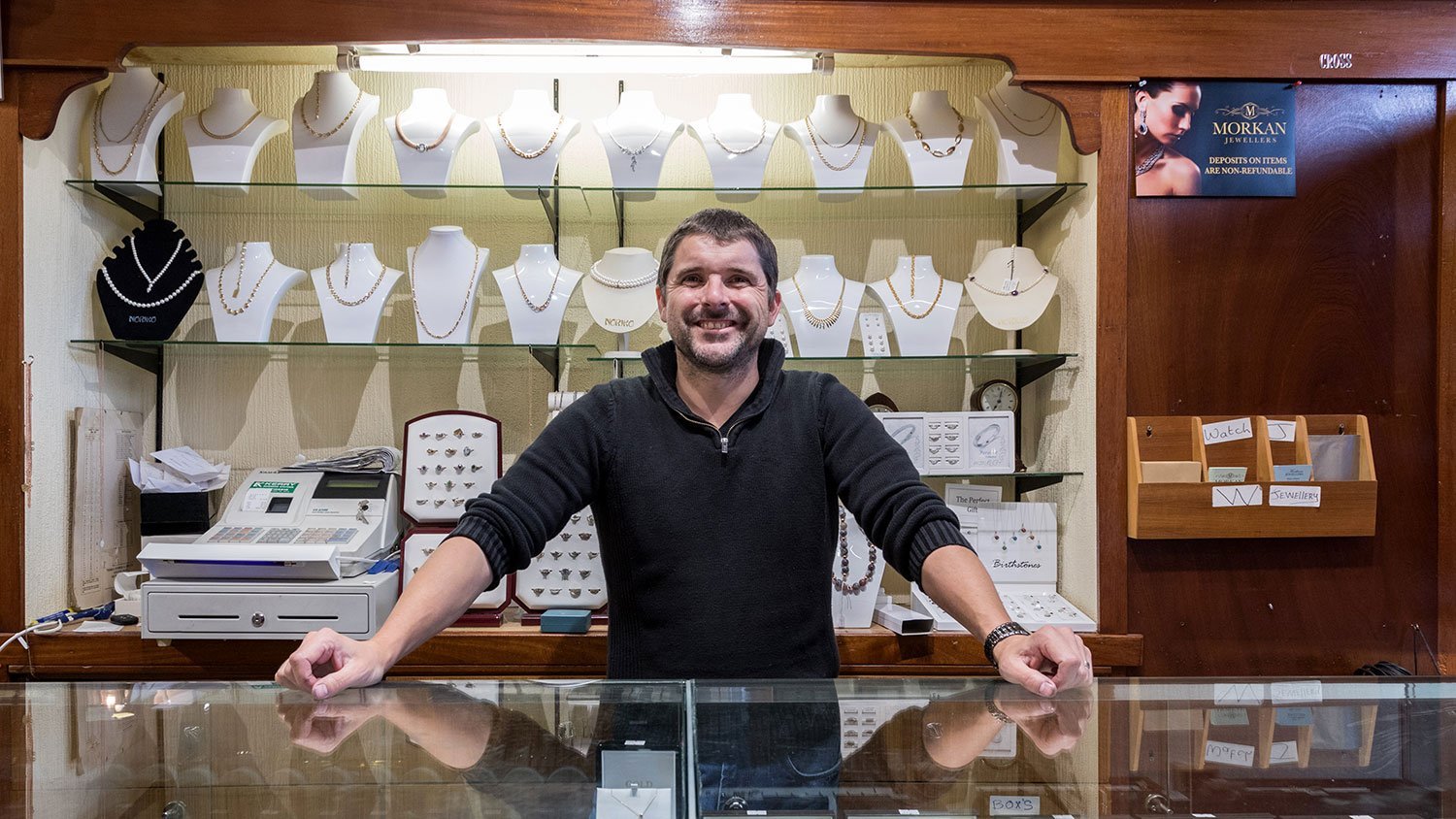