In the “silent, darkened stage” of the family pub, Billy Keane and I sit for a chat on a rainy afternoon in November. Billy is the eldest son of playwright John B. Keane, and Mary Keane. The pub, known locally as John B’s, opened 64 years ago.

For Billy Keane, running a business and running a family go hand in hand. Year round, but particularly in the summer, the pub, along with the town’s other attractions, helps draw people to the town. On a practical side, the pub is a business, and has helped to put his children through college. Billy’s two youngest, Lainey and John have just graduated, Lainey as an Educational and Child Psychologist and John as a Pharmacist. The whole pub shares Billy’s pride in his children’s accomplishments. Billy’s children and his sister Joanna’s children have all worked in pub throughout their college years, and so each milestone in their lives is celebrated by everyone in the pub, often with Billy buying everyone a drink! This sense of community is not just unique to John B’s, but is inherent to the town of Listowel.  Billy says, “There are two families in this town, your own family and the family of the town, and that is what keeps us going.”

Billy has been a barman since the age of 10 and he jokes that his life hasn’t changed very much since. He got involved in the pub again on November 1st, 1993. He cannot say that he took over the pub, because his mother, Mary, was the real boss. At this time there were 41 licences, now there are 14 or 15. Business has gone down a bit but Billy says that “There is hope for rural Ireland, pubs are the parliament of the people, where people get together and chat.”

Running a pub can be tough at times, especially with all of the late nights and while Billy describes himself as the storyteller in the house, he credits his wife Elaine with doing all the really hard work. For a pub to survive, Billy says, “you have to think differently. For example, Mike the Pies was always a great pub and still is, but they have made a name for themselves as a live music venue and are hugely successful.” When Billy got involved in the pub, 26 years ago, he knew that it is best to play to your strengths and started Pub Theatre, “We have a huge reservoir to draw from and incredible local actors who are all friends, because this is a drama pub”. Pub Theatre runs June to August, Tuesdays and Thursdays and the beauty of Pub Theatre is that it is regulars in the pub that make up the performers. Poets, singer songwriters and actors like Gabriel Fitzmaurice and Mickey MacConnell take part each week of the summer, and draw crowds both nationally and internationally. Billy also greets bus tours, who visit throughout the year to hear about the history of the pub and taste Phil’s delicious homemade scones. The local trade is still strong, Billy says, “The farmers are the mainstay of North Kerry and I don’t think they get enough credit for it, if they made money they’ll spend it.

As a writer, Billy writes a column for The Irish Independent newspaper two, sometimes three times a week. He has been writing for the Irish Independent for 17 years, and has a great freedom to write what he wants, and also to mention Listowel on a national platform. He has also written novels, and a selection of his weekly columns, “The Very Best of Billy Keane” has recently been published. As Billy lives in Listowel, he works remotely for the newspaper. While Billy has been working remotely for almost two decades, it has become easier to work from a rural town in recent years. HQ Listowel has opened, providing a workspace for individuals who have decided to live and raise families in Listowel, and technology is making it easier to stay connected. Billy’s advice for working remotely is not to stay remote, “You must meet the people you work with, and get to know them socially. Pick up the phone and speak about the work you have submitted, that way you are connected and they feel like they know you.”

Listowel is a great place to be creative, “You see kids coming from football practice with boots in one hand and a musical instrument in the other, or going to see Jo Jordan for acting lessons in St. Johns. Creative individuals like Aoife Hannon and Olive Stack add to the supportive, creative atmosphere of the town.”  Listowel is a town that works together to create a place that people want to visit.

The pub will celebrate its 65th anniversary in January and there has been a writer in residence every one of those years which has bound it all together. Billy doesn’t see the people that work in the pub as employees but rather as friends. Billy likens himself and his siblings to the chickens growing up, “We were free range”. His dad, John B. attracted the characters but Mary, Billy’s mother, provided advice to women who needed help. One of her great pieces of advice when a woman would come to her, having had an argument with her husband was, “One of you has to shut up”. Mary knew firsthand the hardships that women in Ireland were going through at the hands of various authority figures, and it was Mary that urged John B. to address these societal issues in his writing. Billy’s memories of his dad are ones he cherishes. John B. loved anyone who was a bit different. These eccentric characters here normal for Billy.  He often tells the story of being sent out to buy perfume for Maureen, the blow up doll. “I think these people were more normal than the people who thought they were normal. A lot of people who thought they were normal would be very safe and sane, inwardly would be in a terrible state because they were repressed whereas the characters who visited the pub were the last vestiges of pagan Ireland. I think eccentricity is normality more than normality is normality.”

If somebody is a bit of a character in Listowel, they are encouraged and people are delighted to meet them on the street, “That is the great thing about owning a pub, the characters just walk right through the door, all you have to do is engage with them”. The one way to fit in is to not fit in and just be yourself in Listowel, “If you are going to be cute and cagey people will wonder about you, but if you are a character, people will love to talk to you and will prize your company. We might be the literary capital of Ireland but we are also the character capital of Ireland”.

When asked what he would recommend for a visitor to the town, Billy ran through some of the wonderful attractions Listowel has to offer, a visit to St. Johns with its new director Maire Logue, or a visit to the Lartigue Monorail Museum for a ride on the train, “You can come to Listowel and visit all the attractions and you need never visit a pub!” he says laughing. Billy’s favourite place in Listowel, however, is the Garden of Europe. There you’ll find a monument to his dad designed by Padraig Tarrant, but what is most special to Billy, is the Holocaust Memorial sitting at the centre of the garden. Billy describes how local solicitor Paddy Fitzgibbon and his wife Carmel visited Auschwitz and were so moved by what they learned that they decided to have a memorial made in Listowel.

The memorial is a reminder of what can happen in a society, and shows what intolerance leads to. Billy’s aunt Anne married a Jewish man in America and Billy describes her children, his cousins, as “Kerry Irish, Jewish Catholics”. A few years ago, Billy brought his aunt and cousins to visit the memorial, and as it happens, Paddy Fitzgibbon was there with a group of primary school children explaining the significance of the piece. Billy explains that up until then his cousins had struggled to engage with the Irish side of their heritage but listening to the intelligent questions posed by the children, and Paddy’s articulate answers, moved them beyond belief. His cousins then asked about the two trees standing on either side of the memorial, Billy recalls, “Paddy harvested acorns that he brought with him from Auschwitz and planted them in the Garden of Europe. These acorns came from a very famous tree, a tree that witnessed the atrocities of Auschwitz and is still standing today.” After every storm, Billy makes his way down to the Garden of Europe to check that those young trees are alright. As Billy sits here, in the pub his parents worked so hard for, he explains that the Holocaust Memorial typifies Listowel in a way. Paddy Fitzgibbon, as a former solicitor, has a strong sense of justice. This sense of justice can be seen in the works of all of our writers too, John B. Keane, Bryan MacMahon, and throughout the work of singer songwriter Mickey MacConnell from his days growing up in the North of Ireland. 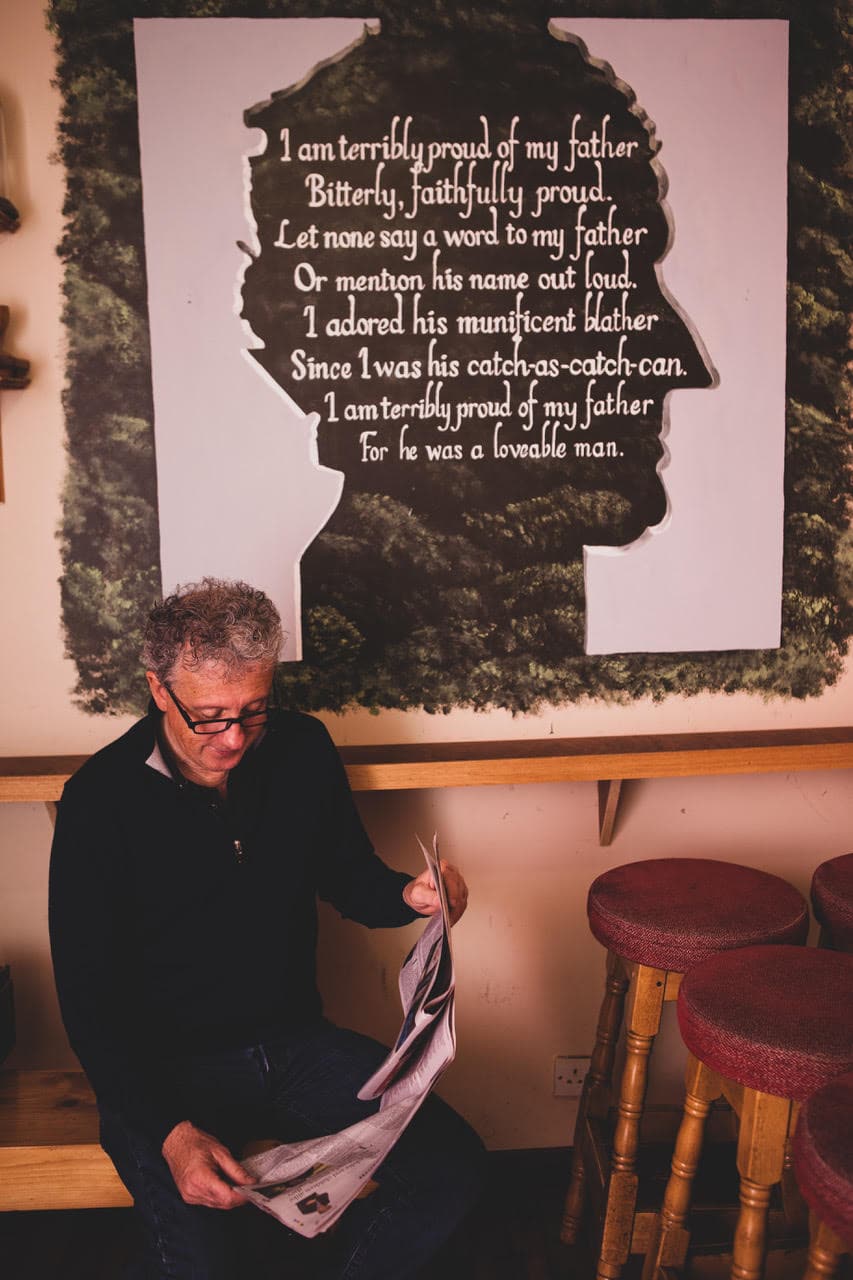 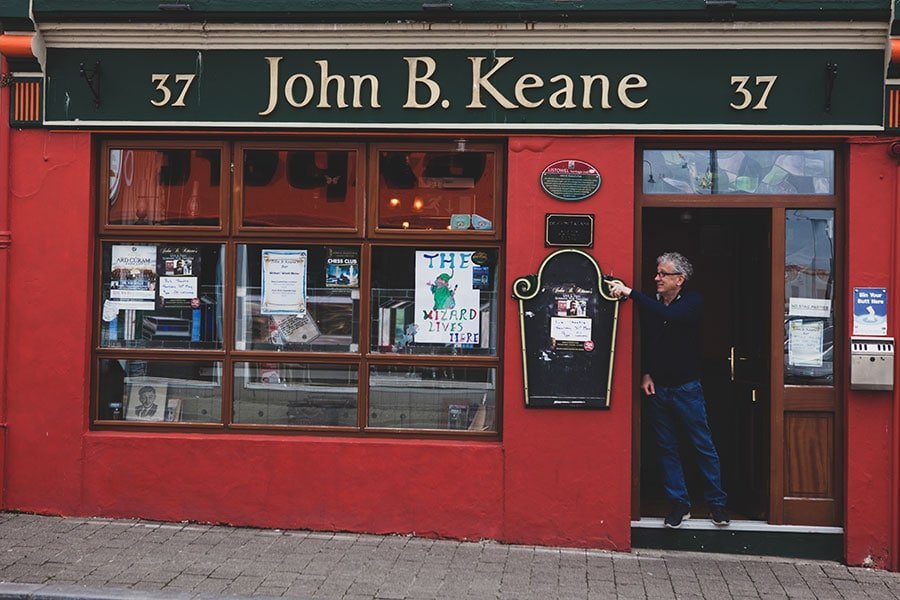